Composting turns food that would otherwise be wasted into a zero-cost fertilizer with the added bonus of helping reduce your school’s carbon footprint. It’s win-win-win! Below is a protocol, adapted from Churchill Road Elementary School, for collecting organic materials and turning them into nourishing food for your school’s plant communities. On a daily basis, Churchill Road collects about 80 pounds of compostable materials from a total of 300 pounds of overall waste! Special thanks also goes to Dranesville Elementary School as part of these procedures were adapted from their methods.

Fruits, vegetables, and even paper products all contain organic material. This organic material can be very rich in both macronutrients (elements required in large quantities such as nitrogen, phosphorus, potassium, sulfur, calcium, and magnesium) and micronutrients (elements required in trace amounts such as iron, copper, zinc, sodium, and many others), all of which plants need to grow. Before plants can access these nutrients, the materials that confine them must be broken down. The process of breaking down organic material is called decomposition and creates decaying organic matter or “compost.”* Composting can be as simple as wetting a mound of leftover kitchen scraps and letting it sit for several weeks or several months. Over time, insects and soil microbes such as bacteria and fungi, will eat the rotting organic material and release the chemical nutrients as waste products. The compost can then be added to soil as a fertilizer or soil amendment—something used to increase the nutritional content of soil. The compost’s nutrients then travel from the soil into the plant via its roots. We can speed up this process by using the techniques given below. So let’s get composting!

*Technical Note: Some sources refer to compost as “humus”—the final decomposed form of organic matter—but compost is not an end product! Even when it is ready to be added to your soil, your compost is still decaying and will continue to do so for years!

What Do I Need to Get Started?

What Kind of Containment System Should I Use?

Enclosing the compost pile saves space and prevents contents from straying.  The enclosure should be collapsible or provide an entry large enough to permit the pile to be turned with a shovel.  It should measure at least 4 ft X 4 ft X 4 ft (a pile under 3 cubic feet generally does not decompose well), but no taller than 6' (too much weight causes compaction and loss of oxygen).  The enclosure can be built from wood, pallets, hay bales, cinder blocks, stakes and chicken wire, or snow fencing.  Premade compost bins are also available.

For ease of mixing and to mitigate the spread of potential odors, it is recommended that you use a rotating bin instead of an open pile.  These are essentially cylindrical barrels suspended horizontally on an axis to allow for rotation.  A few examples are listed below:

What CAN and CANNOT (or SHOULD NOT) Be Composted?

CANNOT (or SHOULD NOT)

Any materials that promote disease, cause odors, or attract pests:

CAN, BUT IN LIMITED AMOUNTS

How Do I Build / Maintain My Compost Pile? 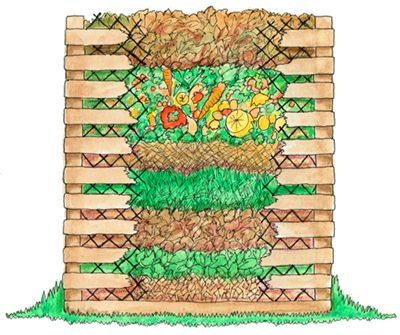 Initially, organize your compost in layers “greens” (food waste) and “browns” (everything else).  The conventional ratio is 1:2.  Between each layer of greens and browns, water your compost until it is about as damp as a squeezed sponge.  Once you have combined all of your ingredients, turn and mix the pile with a pitchfork or shovel (or, in the case of a bin setup, rotate it).  This aerates the pile, allowing necessary oxygen to dry out excess moisture and initiate decomposition.  A pile that is not mixed will take much longer to decompose.  Recommendations for mixing the pile vary from every 3 days to every 6 weeks.  More frequent turning results in faster composting.  Odors indicate that the pile is too damp or lacks oxygen, and that more frequent turning is necessary. Occasional watering may be necessary to keep the pile damp, especially in dry weather.  Covering the pile with black plastic reduces the need for watering; it also prevents rainwater from leaching out the nutrients.

A pile that is decomposing properly should generate temperatures of 140°-160°F at its center.  The heat kills most weed seeds, insect eggs, and diseases.  The pile should be turned when the center begins to cool.  Turning the pile maintains the temperature and ensures that all material is exposed to the center heat.  When the compost is finished, the pile will no longer heat up.

How Do I Know My Compost Is Done?

You will know your compost is ready when it is dark brown, crumbly and has an “earthy” smell.  It should be fluffy and not powdery.  The original materials that were put into the compost should not be recognizable, except possibly for small pieces of stems.  One way to test if your compost is finished is to seal a small sample in a plastic bag for 24 to 48 hours.  If no strong odors are released when you open the bag, the compost is done.

Depending upon seasonal temperatures, a well-built, well-tended pile generally yields finished compost in 2 weeks to 4 months.  An unattended pile made with unshredded material may take longer than a year to decompose.

How Can I Use My Finished Compost?

MULCH: Mulch provides a layer of vegetative material to protect bare soil during the summer months by reducing soil temperature, suppressing weed growth and reducing soil moisture loss.  Compost can do the same thing in gardens and landscapes.

SOIL AMENDMENT: Compost will improve the quality of almost any soil, and for this reason it is most often considered a soil conditioner.  Compost improves the structure and texture of the soil, enabling it to better retain nutrients, moisture, and air for the betterment of plants.  Compost also adds nutrients to your soil, containing a variety of the basic nutrients plants require for healthy growth.  In addition to the main three (nitrogen, phosphorous, and potassium), of special importance are micronutrients such as manganese, copper, iron, and zinc.

Composting at Your School

The gray bucket (fig.A) on the table is used to collect leftover milk and other liquids.  Remaining solid food wastes are placed in the green bucket (fig.B). Oranges--which can be tricky to compost—are separated into the yellow bucket (top fig.B).  Citrus generally takes much longer to decompose than other food wastes.  For this reason, you may want to put citrus in its own long-term pile when starting your compost.

The point of any collection system is to make it as simple as possible to sort waste.  You can assign student volunteers to add the compostable materials to your compost pile on a regular basis. Compost piles and bins are best kept close to your garden areas for ease of access. (fig.C)

What About Worm Bins?

Worm bins are a great way to compost on a small scale if you don’t have the outdoor space for a large compost bin.  Worm bins operate very similarly to the above methods, with the addition of “red wiggler” worms to aid in decomposition.  They are also a great teaching tool by which students can observe the principles of composting in action.  The following website gives an overview of the specifics on starting and maintaining a worm bin:
Worm Composting

Worm compost (also known as worm castings [i.e., worm poop] or vermicompost) is some of the richest fertilizer around and can be used for the same purposes as regular compost.